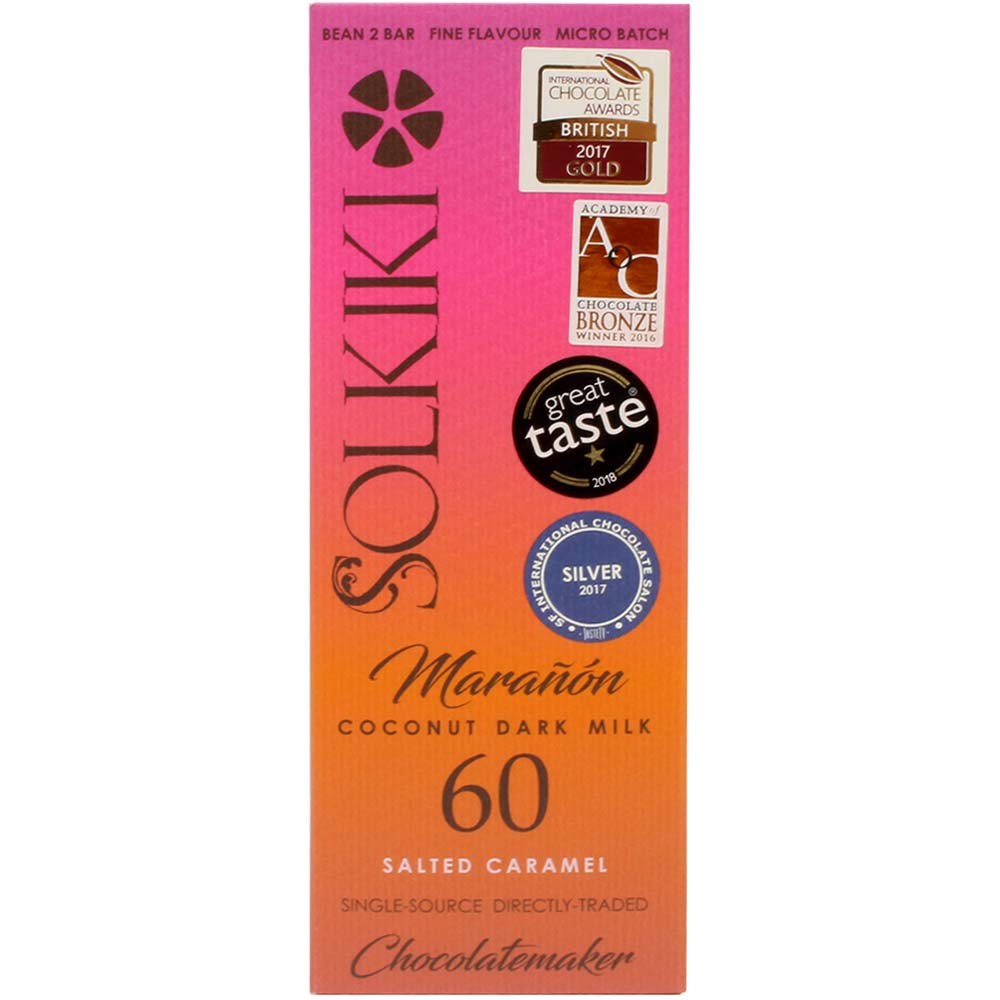 This very rare and important Fortunato No.4 cocoa is conched with coconut milk and a pinch of pink salt for a very long time, which brings out the natural caramel and liquorice notes of the bean and creates a naturally salted caramel-milk-chocolate creation with light fruity note reminiscent of bananas and banoffee.

In a remote canyon of the Marañón River in Peru, Mother Nature or an ancient civilization has hidden this chocolate treasure. For centuries, these trees, growing in an isolated microclimate at twice the normal level, have produced beans with flavors no one has ever tasted ....... - until now. These recently discovered trees had ancient relatives that once grew on the flat plains near the Pacific Ocean in Ecuador. Locals called these dark brown beans "Pure Nacional ". In the 1820s, a Swiss chocolate maker discovered these remarkable beans and brought them to Europe and America. Within a decade, chocolate made from the Pure Nacional beans dominated the gourmet chocolate market in Europe and the USA. Chocolate was famous for its aroma and taste, reminiscent of delicate flowers and fruits. Suddenly the trees became infected and in 1919 the Pure Nacional chocolate disappeared. Almost 100 years later, the trees, which were believed to be extinct, were rediscovered near the Marañón River, which forms the headwaters of the mighty Amazon. During centuries of growth in isolation, these rare beans have developed. To the astonishment of the scientists, pure white beans now grow in the same pods as the dark brown beans. This creates a completely new taste profile. The all-white beans add a nutty flavor to the traditional floral and fruit flavors that made chocolate famous almost 100 years ago. The United States Department of Agriculture performed genetic testing on these trees and reported, "This Pure Nacional variety is genetically identical to its Ecuadorian ancestors. Growing in the same pods as the dark brown beans, however, is an unprecedented discovery. This combination of Pure Nacional beans is nowhere else in the world . " The limited number of trees grow on small farms in this remote gorge where there is no infrastructure. After the harvest, the beans become one place on foot, by donkey, and by motorcycle brought in the Marañón Gorge. There the beans are fermented and dried in a special process that was developed to protect the rare delicate aromas and flavors. The white and dark brown Pure Nacional beans are then brought to our small laboratory in sunny Dorset, where we make the chocolate. We work diligently, carefully monitoring the results and continuously refining our process to protect the delicate nut, flower and fruit flavors as we slowly turn the beans into the chocolate you see here. The bean is named after Don Fortunato, the farmer where the purest trees were found. Enjoy the aromas and tastes of the rarest chocolate in the world that no one has ever tried ....... until now.

We hope that you will enjoy Maranon Salted Caramel - Coconut Dark Milk from the Marañón Valley in Peru.